The first operating session of the Potomac & Patuxent in more than two years was completed in December. While most of the session went as planned, the crew still had some problems with the Digitrax Chief digital command control (DCC) system. Some of the problems were the result of operator errors, but the most irritating problem stems from the clustering of three separate sections of the railroad on a single booster. A short on one section temporarily stops action on all three clustered sections, confusing the operators who are not aware that the short is across the room. I am investigating new power management products from either Digitrax or Tony’s Train Xchange that seem to be designed for alleviating these types of problems.

The scenery at Steuart Petroleum (an oil depot/distributor) in Benning was completed using Crummy Products’ Wooden Oil Tanks and Walthers’ Phoenix Fuel Oil Corporation. I modified the office building by cutting in a loading door in the back wall and adding a simple interior. The rear door allows for unloading box cars carrying barrels or cases of petroleum products. Elsewhere, on the East Washington Branch, joint bars were applied about every 39 feet before the rails were weathered. Then, “rust” was dry brushed on each joint bar. The front section of the Sanitary Grocery Company warehouse was completed.

Another Plymouth industrial locomotive was added to the P&P roster. The locomotive, though unpowered, will be electrically connected to one of the other Plymouths. The wheels of the dummy will be used for improved electrical pickup.

In July, I journeyed to Norcross, GA, near Atlanta, for the national O Scale Convention. The barbecue banquet was delicious and I enjoyed the Civil War/Railroad tour, but there was only one local railroad open for visiting and very few clinics. Also, most of the dealers were showing brass steam and diesel locomotives when I was looking for decals and detail parts. At least, I came home with most of my money.

So, at the next local train show, I bought one of the new Bachmann On30 passenger train sets. These are narrow gauge, O scale trains designed to run on HO standard gauge track. I also bought the book, Hidden Treasures, The Story of the Ohio River and Western Railroad. This narrow gauge railroad ran through the southeastern section of my native Ohio, interchanging with the B&O. I thought very seriously of “starting over;” building a prototype railroad based on the OR&W. I was sketching track plans, but, in the end, I decided that I wanted to see the P&P through to completion. I eventually sold the On30 locomotives and passenger cars to a model railroader in England. I came out about even financially and he’s happy with the equipment (I hope).

In the fall, I attended the Mid-Eastern Region (MER) Convention in Hagerstown MD. On the way, I took the opportunity to do some railfanning at Point of Rocks, MD. At the convention, I enjoyed operating on Bob White’s Appalachian Northern Railroad, spending an evening with Art Selby and his Blue Ridge Midland and an afternoon with Marv Kershner and the Sagalot Central, and touring the CSX locomotive facility in Cumberland, MD. Sadly, I must note that Marv passed away four nights later. Please remember his family in your prayers.

I continue to volunteer one Saturday a month at the B&O Railroad Museum. The museum is going through some significant changes of leadership at the moment, but there are some exceptional pieces of equipment on display. If you have never visited us, or have not been there in a number of years, I recommend an excursion to Pratt Street in west Baltimore.

For those of you who may have received my business card in the past, or are more recent converts to electronic mail, my new email address is kenesperjr@netzero.net. And, no, the P&P does not have a web page (yet?), but digital photography has come to the P&P. 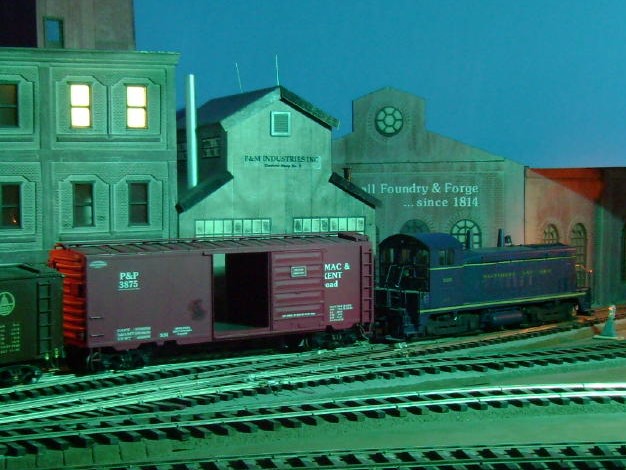