In August, after a couple of years of procrastinating, the MOW crew completely rebuilt the troublesome Twining City crossing. Derailments are significantly reduced, but not completely eliminated. 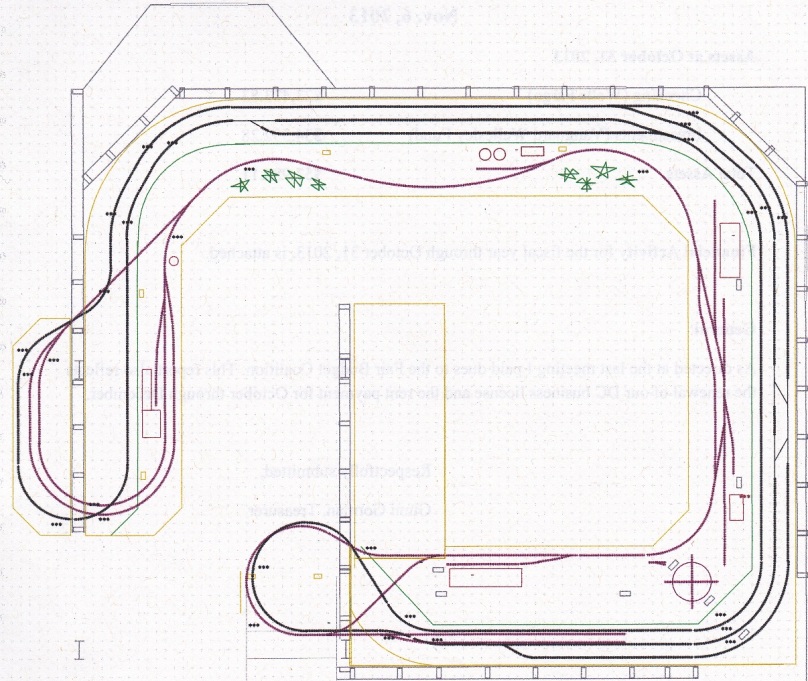 Black line: P&P 3-rail; Red line: OR&W On30; minimum radius for each railroad is 18 inches; undecided on approach to turntable

Following this decision, the MOW removed the track and turnouts on the 2-rail and 3-rail layouts. The company sold the 2-rail flex-track (Old Atlas) and Old Pullman turnouts to other railroads.

By the end of April, the railroad completed a shell swap of a Weaver Union Pacific FA2/FB set (3-rail) with a B&O FA2/FB set (2-rail). The B&O unit operated on the P&P display railroad. The B-unit remains unpowered. An attempt to install the drive train from a Weaver RS-3 (3-rail) in the B-unit was unsuccessful. Later in the year, that drive train ended up under the custom painted shell of Washington Terminal Company “RS-3” (#43). The UP set, 2-railed and equipped with a Digitrax decoder, was sold on O Scale Yard Sale.

The loco shops purchased a TMCC-equipped Weaver VO-1000 (NP #) on the used loco market (eBay). Initially, the plan was to use the motors from the NP unit to repower the B&O unit damaged in a crash last year. Then, the shop foreman got the bright idea of converting the B&O unit to 3-rail using the motors and pickups from the NP unit and an electronic controller (E-unit) from Dallee/Weaver. After a couple of light moves around the railroad, controller was extremely hot. Fortunately, the locomotive was shut down before damaging the controller. Apparently, the amperage draw of the two motors was too much for the controller. The Dallee controller ended up in the WTC RS-3 #43. The shop foreman has decided to implement the original plan, but no progress has been made due to the holidays.

The B&O car shops acquired three box cars, repainted a hopper, and built a reefer and stock car from kits.

During the year, the OR&W purchased a caboose, box car, flat car, and tank car. Railroad management continues to monitor the used car market for additional rolling stock. Because of the planned expansion noted earlier, the number of freight cars and locomotives needed to operate the railroad may increase.

The B&O Railroad Historical Society held its National Convention in Findlay OH in early October. We spent two days exploring the old Chicago Division between Willard and Deshler, Ohio. With the cooperation of CSX, we were able to enter Willard Yard with its double hump and the new intermodal facility outside North Baltimore, Ohio.

The annual MER Convention was held in nearby Rockville MD in mid October. In addition to attending the board meeting, I was part of a large group that operated Jeff Mutter’s Erie Lackawanna themed, HO-scale railroad. I enjoyed a tour of the Baltimore Light Rail maintenance facility at North Avenue.