The Potomac & Patuxent Railroad operating crew (a round-robin group) conducted eight regular operating sessions throughout the year. And, a Sunday session was run with Bob Schildt, a hirailer from the Philadelphia area. With the opening of the Twining City switching district, five trains are run during each operating session: Port Shepherd Job; Uniontown Turn (U-Turn), TC Switch, Second Port Shepherd, and the B&O Coal Extra to the Potomac Electric plant. All trains are staged in Benning Yard.

In locomotive news, the resin shell of an Alco-General Electric-Ingersoll Rand (AGEIR) oil-electric was acquired from the Adirondack Car and Foundry Company of Tennessee. The locomotive will emerge from the railroad shops as B&O 195 after the chief engineer figures out how to install trucks, motor, gearbox, and decoder. 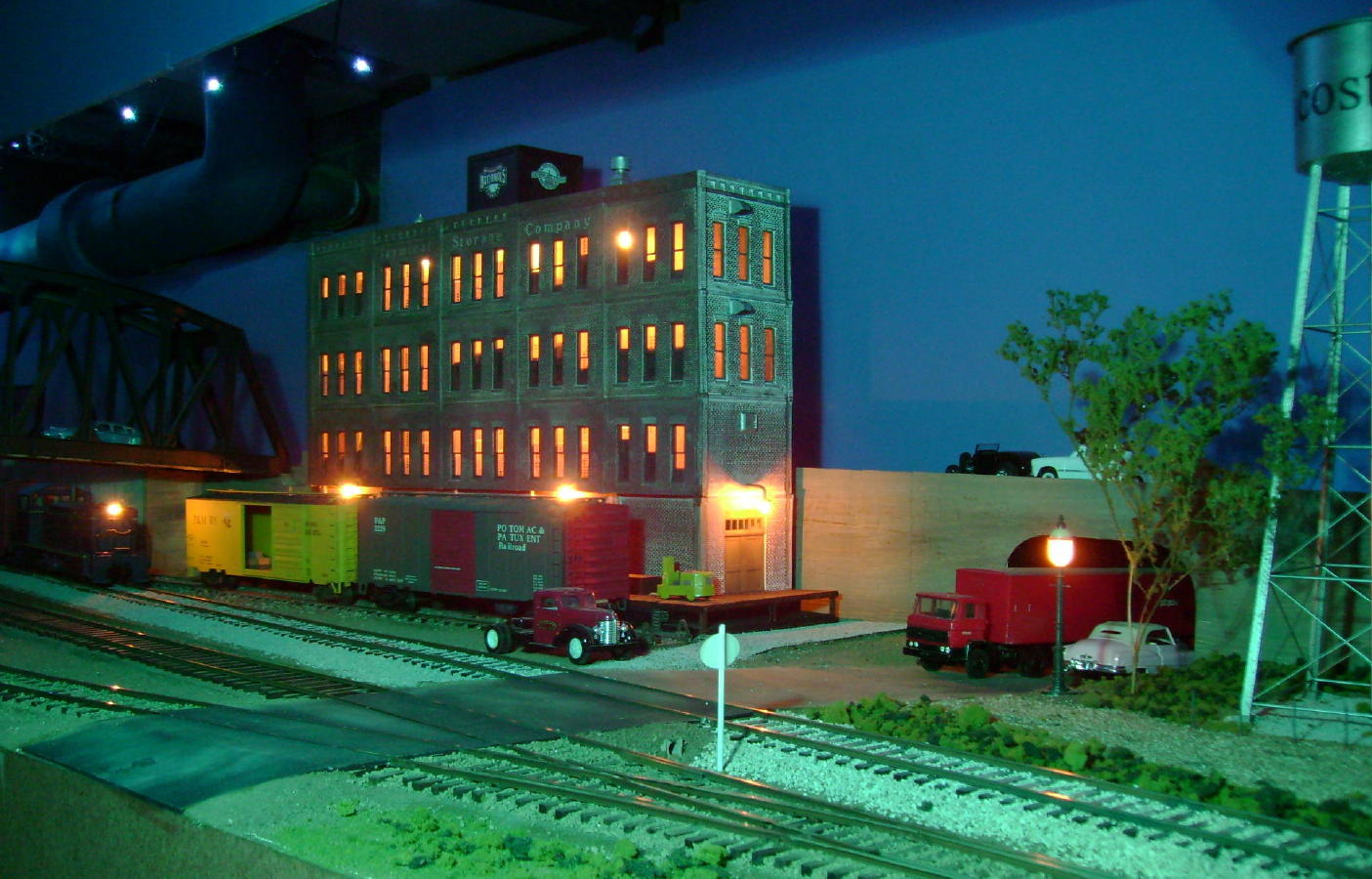 Three major structures were added to the railroad this year. Terminal Storage is a four-story warehouse constructed from DPM components. This industry is serviced by the Uniontown Turn. There are nine light bulbs in this structure that makes it positively glow in the dark. With the addition of this structure, I had to upgrade the transformer that I was using for my building lights circuit. The old one didn’t have enough amps to power the lights of Terminal Storage. Foxall Foundry and Forge is a kit-bash using parts from the IHC Big 2-Stall Engine House. I suspect that most of these kits end up as something other than an engine house. This structure has lights and sound. A “machine shop” sound module is located under the bench work. The third structure completed this year was the Green Bag Cement Company across the tracks from Foxall Foundry. This was scratch built from cardboard tubes, strip woods, and card stock. The loading shed is well lit. Green Bag Cement is located in Port Shepherd.

I added an industrial background to Uniontown using a variety of cutouts. My principal source was Pioneer Valley Models with an assist from William K. Walthers Instant Buildings. The HO-scale Walthers material is used to create a sense of distance (forced perspective). My background is composed of narrow 3D buildings, O-scale PVM flats mounted on foam-core, and the HO-scale cutouts over-laying each other. The buildings are illuminated (see photo below).

The Maintenance of Way Department disposed of some used, excess turnouts and track this year. An assortment of Code 148 #5 and #6 turnouts was sold to a railroad in Pennsylvania. A Code 148 double-slip switch and sections of Code 148 flex-track were shipped to Art Selby for use on the Blue Ridge Midland Railroad.

Hilary Smith and I returned to Montpelier, VA, in January, March, and November for operating sessions on Mike Dodd’s Virginian Railway (http://virginian.mdodd.com), a time table and train orders railroad set in 1954. I had some success running the Celco Job, considered a rather difficult switching challenge.

I joined four members of the Potomac Division in attending the NMRA Convention in Philadelphia, PA, July 2-7. I split my time between volunteering, construction clinics, and layout tours. This year, I attended the Scratch-building with Styrene session presented as part of the Modeling with the Masters series. In this clinic, I built a small station in HO-scale. I also attended one of the Make and Take sessions building an O-scale small freight shed using wood. To help the convention hosts, I worked about 4 hours each in the auction room, registration table, and tour desk. The layout tours that I selected focused on O-scale or the B&O. I also saw a baseball game between the Philadelphia Phillies and the San Diego Padres (non-rail tour). Since this was a model railroad convention, it seemed appropriate to travel to/from Philadelphia on Amtrak.

Although I was not able to finish either of my structures during the construction clinics, each of them was completed since the convention (well, almost). The styrene station needed painting and weathering, and it is, indeed, done. The freight house underwent a significant redesign with the addition of a Grandt Line freight door and relocation on the platform. And, of course, I had to add interior lights. The freight house needs weathering and final assembly. 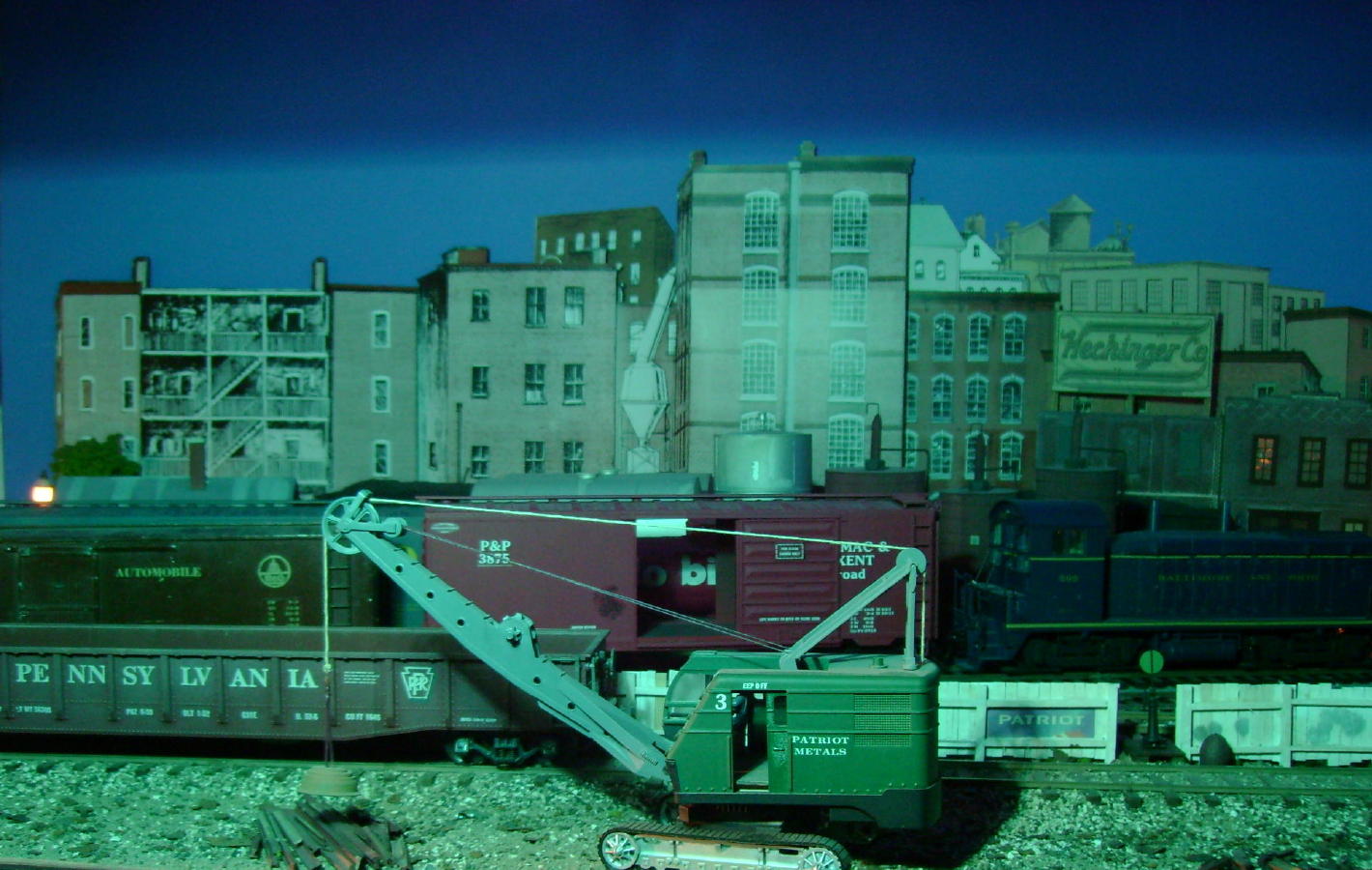 The P&P website, http://www.geocities.com/oscaledc/, was updated with a series of “night” shots of the railroad. These were taken using the Candle setting on my wife’s new digital camera, a tripod, and a blue light bulb. I’m very pleased with the results.

P&P management will focus again on operating sessions and scenery in 2006. There is still more track to ballast; more backdrops and scenery to be added; and the On30 Capital Traction line to be installed. I already have my reservations for the NMRA Convention in Detroit in July and plan to attend the O Scale National Convention in Indianapolis in September. It’s just another typical year on the P&P.