The Potomac & Patuxent Railroad operating crew (a round-robin group) conducted regular operating sessions throughout the year. For these sessions, all trains run as extras and car movements are governed by waybills. The P&P uses a modified version of a car-card system. The four trains run during each operating session are staged in Benning Yard. All operating sessions were conducted with the aisles lights on although I continue to threaten to dim the house lights soon. The operating environment was enhanced by the addition of small sound boxes under the railroad that play Green Frog compact disks featuring various background sounds during the sessions.

The maintenance-of-way crew, on the third try, completed the construction of a curved crossing that will permit access to the Twining City switching district. By the end of the year, all the TC trackage and switches were in place and electrified. Operations in the district should begin in January 2006. With the opening of Twining City, the railroad, as designed, is now complete. 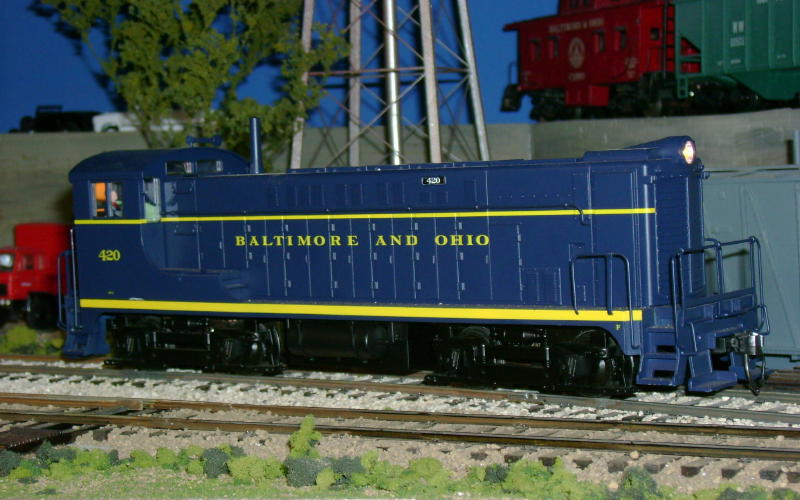 In locomotive news, newly acquired B&O Baldwin VO-1000 diesel switcher (manufactured by Weaver), number 420, was assigned to the Twining City switching district. The undecorated Alco RS-1 road switcher acquired last year from AtlasO was sold to a railroad in California. In turn, the company bought another Alco RS-1; this is a brass kit manufactured by Gilmaur of England. The rostered Weaver Alco RS-3 will probably be cannibalized to provide the frame, motor, and trucks for the brass RS-1. The new RS-1, when finished, will emerge from the P&P paint shops as Washington Terminal Company 43 or 46. The sale of the AtlasO RS-1 provided the funds for both the Weaver Baldwin and the Gilmaur RS-1.

Hilary Smith and I journeyed to Montpelier, VA, in March and April to participate in operating sessions on Mike Dodd’s Virginian Railway (http://virginian.mdodd.com). This is a time table and train orders railroad set in 1954. We were apprentice engineers during the first session, but I ran Glen Lyn Yard during our second session. We plan to go back in 2006.

I joined five members of the Potomac Division in attending the NMRA Convention in Cincinnati, OH, July 3-8. The layout tours that I selected focused on O-scale or the B&O. The most memorable were the layouts of Tony Michel (O scale), Bob Bartizek (O gauge), and Greg Simpson (OO scale, English prototype). I also went on a great rail fanning tour of the area and a tour of Tower A and Cincinnati Union Terminal.

In August, my dad and I took Amtrak to Colorado where we rode the Durango & Silverton Narrow Gauge and Cumbres & Toltec Scenic Railroads. In between, we toured Mesa Verde National Park and attended the wedding of my nephew at the Philmont Scout Camp near Cimarron, NM (the real reason that we went west). We rode the Capital Limited from Washington (me) and Toledo (my dad) to Chicago where we transferred to the Southwest Chief. During the layover, we toured the Museum of Science and Industry. We traveled in coach and ate most of our meals in the diner. We detrained in Trinidad, CO, where we picked up a rental car.

Both the D&S (https://www.durangotrain.com/) and C&T (https://cumbrestoltec.com/) are remnants of the Denver & Rio Grande Railroad. The scenery on the D&S is more spectacular than that of the C&T, but the rail-fanning opportunities are greater on the C&T. On the D&S, you are assigned a seat in a car and that’s where you have to stay unless you are going to the commissary car. On the C&T, the gondolas are open to all passengers, plus space is provided on each end of every coach to stand outside.

In October, three of my round-robin cohorts and I traveled to Cary, NC, for the MER Convention. Marshall Abrams and I operated on Dil Huey’s Brandywine Valley Railroad. The railroad is completely sceniced and features dozens of touch screens that are used to operated locomotives and turnouts, plus report location of trains across the railroad. We toured layouts on Thursday evening, Friday afternoon and evening, and Saturday morning. The Central Carolina Live Steamers, on the property of Tony Sears, was spectacular. We wish that we would have had time to operate on Jack Frame’s Monon Railroad.

P&P management will focus on monthly operating sessions and scenery in 2006. Track needs ballasting; backdrops and scenery need to be added; and the On30 Capital Traction line needs to be installed. I already have my reservations for the NMRA Convention in Philadelphia. It’s just another typical year of the P&P.